According to the Gimpo Fire Station, the blaze started at around 9:05 a.m. in the boiler room inside the Gimpo Rehabilitation Clinic, located on the third and fourth floors of a five-story building. The fire, contained in less than an hour, did not spread to other floors, the officials said. The facility had 132 patients at the time of the fire. 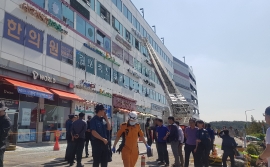 Firefighters break a window of the nursing hospital on the fourth floor of building. (Choi Ji-won/The Korea Herald)

The authorities believe the fire started in the boiler room, where oxygen concentrators were also stored.

A member of the institution’s administrative staff, surnamed Lee, said he was inside the boiler room when the fire started. He was switching the oxygen concentrator to manual mode as the building’s electricity had been shut off for a routine government safety inspection.

“I heard something pop before seeing the fire start from behind the tanks. The blaze spread fast in front of my eyes,” Lee said. He and other staff members tried to contain the fire with fire extinguishers, but that was not enough. 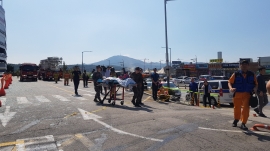 The fire agency issued a level-one alert, mobilizing all firefighters in Gimpo. More than 110 firefighters and 51 fire engines were deployed, putting out the fire at 9:55 a.m. and evacuating the building by 10:05 a.m.

The evacuated patients were transferred to 12 hospitals, two in Gimpo and others in nearby Incheon and Gyeonggi Province, according to the Gimpo Public Health Center. Kang Hee-suk, the head of the center, said eight of the 47 people who were injured are being treated for severe injuries, and the death toll could rise given their ages. The exact causes of the two deaths require further investigation, Kang added.

It appears it was the smoke, rather than the fire itself, that caused the large number of casualties. The fire did not spread beyond the boiler room, but black smoke spread fast to the wards. 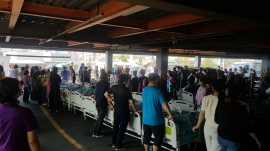 Patients of Gimpo Rehabilitation Clinic in Gyeonggi Province and their family members wait at the building’s parking lot to be transferred to hospital Tuesday. (Choi Ji-won/The Korea Herald)

According to Eum Kyung-ran, a 72-year-old patient at the facility, gray smoke suddenly blinded her as she was chatting with fellow patients.

“I can’t really remember how I came out of the building. Nurses came in and rushed us out through the smoke. I couldn’t see properly and I choked on the smoke. It was chaos,” Eum told The Korea Herald. She sat wrapped in blankets in a wheelchair at the building’s parking lot, where the patients had been evacuated to.

“The building’s elevator did not work due to the electricity inspection and the rescue team had to evacuate the patients through the stairs and out of the window with ladders,” Kwon Yong-han, the chief of the Gimpo Fire Station, said. According to Kwon, the fire alarm went off but the sprinklers inside the boiler room were not activated. He added that there would be further investigations of the building’s fire safety equipment.

Families and guardians of the patients said the nursing home had not called them about the accident. Cho Hee-suk, 49, said she rushed from her workplace to the nursing home after an acquaintance called her with the news.

“I had to wait more than an hour and a half before I could check the whereabouts of my father,” Cho said.

Eum’s daughter, Kim Yun-hee, also said she had not received any word from the nursing home. “My mother has been waiting in the parking lot for more than three hours now, but they only told us she could not go home and had to be transferred to the hospital as there could be damage from smoke inhalation.”

(Video shot and edited by Kim So-mee/ The Korea Herald)