The team of Annika Sorenstam and Park Sung-hyun won the foursome competition at an exhibition match featuring LPGA stars from the past and present.

Sorenstam-Park combined to shoot 2-over 74 at the Seolhaeone·Cell Return Legends Match golf event Saturday at Seolhaeone Resort's Salmon and Seaview Courses in Yangyang, 215 kilometers east of Seoul in Gangwon Province. 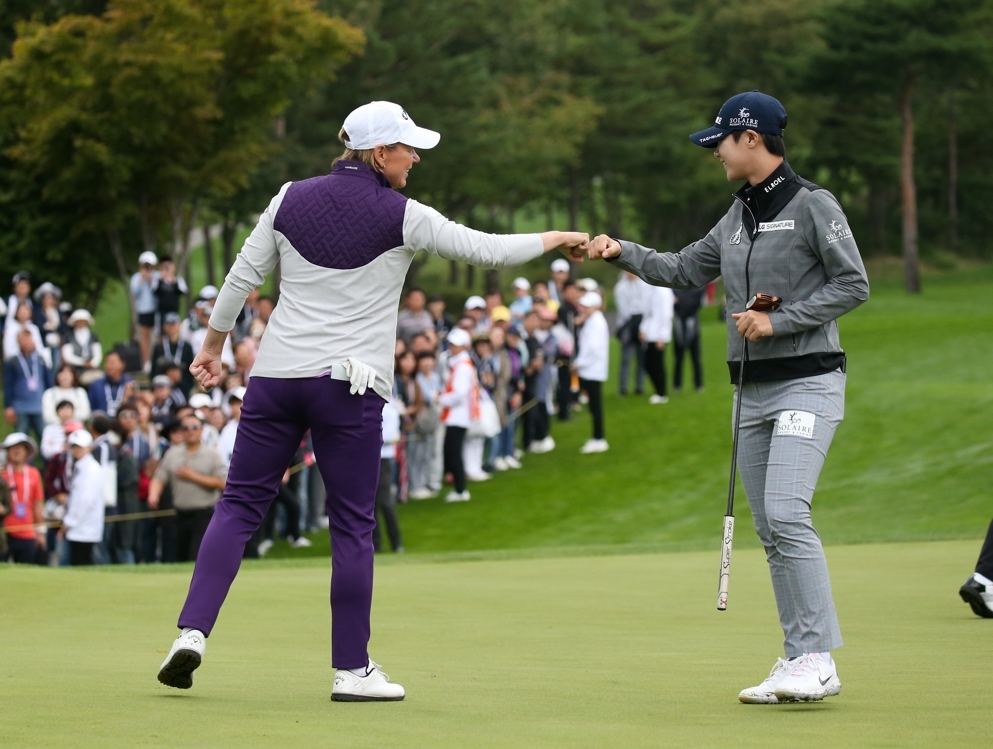 Annika Sorenstam of Sweden (Left) and Park Sung-hyun of South Korea bump fists after making a birdie on the first hole during the foursome competition at the Seolhaeone·Cell Return Legends Match golf event at Seolhaeone Resort's Salmon Course in Yangyang, 215 kilometers east of Seoul, on Saturday, in this photo provided by SEMA Sports Marketing. (PHOTO NOT FOR SALE) (Yonhap)

Sorenstam, a 72-time LPGA champion from Sweden, was part of the "LPGA Legends" team, which included fellow World Golf Hall of Famers Pak Se-ri of South Korea, Lorena Ochoa of Mexico and Juli Inkster of the United States. Park, world No. 2 from South Korea, was on the "Next Generation" team, which also featured other current stars, Ariya Jutanugarn of Thailand, Lexi Thompson of the US and Minjee Lee of Australia.

On Saturday, the players competed in the foursome, or alternate shot, stroke play. The two partners took turns hitting shots, with the legends playing tee shots on odd-numbered holes and their partners doing so on all other holes.

Ochoa-Jutanugarn finished one shot behind the winners. Inkster-Lee shot 76, while Pak, the host of the event, and Thompson carded an 81.

Ochoa-Jutanugarn were the steadiest team early on, collecting eight straight pars to start the day. They had bogeys at the ninth, 11th and 13th but recovered with birdies at the 14th and 16th.

On the 16th hole, Ochoa nearly holed out for an eagle from the fairway and set up a tap-in chance for Jutanugarn that gave their team the lead at 1-over par.

Jutanugarn put her second shot into a greenside bunker at the 17th, and the best Ochoa could manage was to punch it out to rough right in front of the sand trap. Jutanugarn rolled her par putt a few feet past the hole, and Ochoa made a knee-knocking bogey putt as her team dropped to 2-over par.

Sorenstam-Park had three bogeys on the front nine but bounced back with birdies at the 12th and 14th to stay close with Ochoa-Jutanugarn. At 2-over through 16, they trailed the leaders by a shot with two holes to play. Then at the 17th, Park drained a par putt after her second shot landed in the same bunker that Jutanugarn's shot found, and the two teams were tied at 2-over going into the final hole.

Jutanugarn found more trouble off the tee at the 18th, and after Ochoa punched it out, Jutanugarn sent her third shot into a bunker.

Meanwhile, Sorenstam-Park held steady to reach the green in two. Sorenstam left her long birdie just inches short, and Park tapped the ball in for the par that proved to be the difference.

Inkster-Lee had a roller-coaster day. They birdied the opening hole but doubled bogeyed the third. After four straight pars, Inkster drained a birdie putt at the eighth. The duo then bogeyed three of the first four holes on the back nine.

Pak had a wild day herself. Her wayward opening tee shot went out of bounds, and she and Thompson had a triple bogey on the first hole. But Pak made up for that miscue by making consecutive birdie putts at the seventh and the eighth. But Pak-Thompson didn't have another birdie the rest of the day.

Pak, the host of the event who extended invitations to seven others, thanked the players for making themselves available for this "significant event."

"It's difficult for these players to all gather in one place, and there's no event on the tour that features active players and legends together," Pak said. "I hope fans will take away good memories from this. I'll try to build this into a regular event."

Pak said she had butterflies in her stomach standing on the first tee, just the way she did during her playing career. The ugly tee shot on the first hole did nothing to take away Pak's joy on this day.

"I was so relaxed and I had a lot of fun," she said. "I don't think I ever smiled and laughed so much in any round during my career. This meant so much to me.

The participants said they enjoyed getting to know more about each other in a casual round of golf, while also praising the golf course for being it excellent shape.

"It was nice being out there, and we don't get to do this often," said Inkster, who added, "Minjee and I, we want revenge."

The result clearly didn't matter much to these golfers, with the scowls and steely stares of regular competitions replaced by giggles, fist-bumps, friendly banter and selfies.

The scene at the first tee was particularly jovial. Sorenstam got on FaceTime with her family and showed them hundreds of Korean fans surrounding the tee. Jutanugarn and Thompson took panoramic pictures of the crowd with their phones. Even the usually stoic Park couldn't stop smiling.

Fans took photos of the players at liberty -- usually a big no-no at tournament golf -- and the players didn't so much as flinch at the sounds of smartphone cameras going off.

On Sunday, the four legends will hit ceremonial first tee shots, while the four current stars will play a skins game. Proceeds from the match will be donated to help Gangwon Province's recovery efforts from wildfires earlier this year.