When Park Sung-hyun was a young girl aspiring to become a professional golfer, she got an autograph from South Korean golf icon Pak Se-ri. Park laminated that sheet of paper and posted it on her bedroom wall, hoping to one day make it to the LPGA Tour like Pak did. 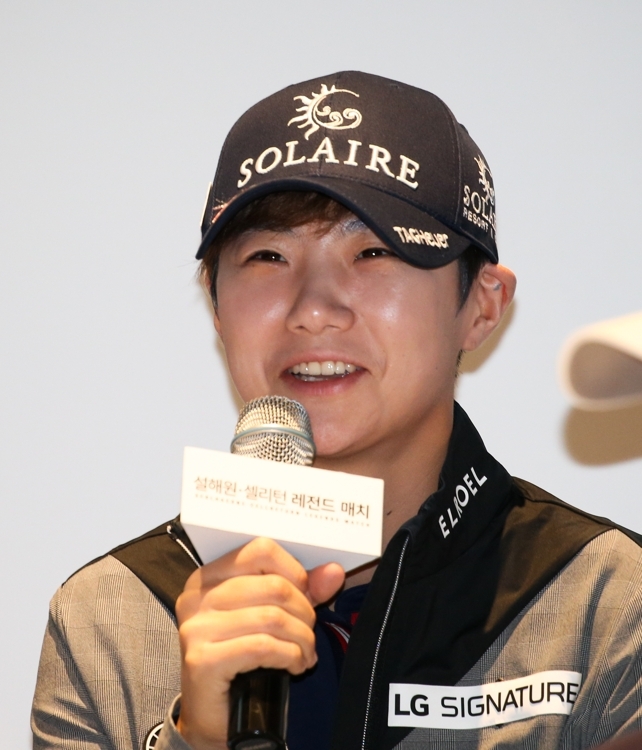 South Korean golfer Park Sung-hyun speaks at a press conference ahead of the Seolhaeone·Cell Return Legends Match golf event at Seolhaeone Resort in Yangyang, 215 kilometers east of Seoul, on Sept. 21, 2019, in this photo provided by SEMA Sports Marketing. (Yonhap)
And this weekend, Park will get to walk on the same fairways as Park at an exhibition match play event, along with other LPGA legends that she grew up idolizing.

Park is a member of the "Next Generation" team at the Seolhaeone·Cell Return Legends Match in Yangyang, 215 kilometers east of Seoul, joined by other current stars Lexi Thompson, Ariya Jutanugarn and Minjee Lee.

Each of them has been paired with a player from the "LPGA Legends" team, made up of Pak, Annika Sorenstam, Lorena Ochoa and Juli Inkster.

At the pre-match press conference, Park recalled how she was inspired by all four of the legends.

"I remember looking up at the autograph from Pak Se-ri every day, and my mother and I were also huge fans of Lorena. We even went to see her play when she came to Korea," Park said. "And whenever Juli and Annika were on TV, my coach told me, 'I hope you can grow up to be like them.' And I hoped they wouldn't retire until I became professional."

And Park, world No. 2 and the 2017 LPGA Player of the Year, added, "This opportunity to play with them is as big of an honor as winning my first LPGA tournament."

Park took time during LPGA's midseason break to fly home, even though she has to travel back to Indiana for a tournament. But as soon as she saw who was going to play in Yangyang, Park said she didn't even hesitate.

"This is an incredible lineup, and I really wanted to come here," she said. "There was no question in my mind I was going to come here. I still can't believe I'll be playing with them."

Thompson, world No. 3, said she was inspired by the four legends in many different ways.

"Honestly, I think we've all looked up to all these players as role models, not only for what they achieved on the golf course but how they were off the course with the fans and how they gave back to the game," Thompson said. "That's most inspirational to me. It's a huge honor for us to play with the golfers we looked up to growing up."

Lee and Jutanugarn also expressed their gratitude, saying the four legends were "amazing" for being great role models.