[Weekender] From eyesores to hot spots

How run-down factories get art-ified

Rusty, abandoned factories and warehouses are often massive eyesores, shunned by neighbors for safety concerns. But increasingly, some of these run-down structures are finding new life as venues for the arts, drawing artists, hipsters and tourists with their remarkable aesthetic combination of old and new and historic backgrounds.

More than just the visual appeal, creative repurposing is a very economic decision, according to one construction industry insider. 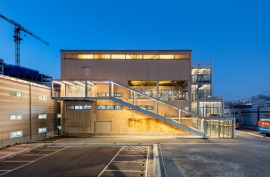 The exterior of Cosmo 40, located in Incheon (Photo by Shin Kyung-sub)

“It doesn’t just change the building’s looks. It saves costs. Frame construction usually make up a large share of construction costs. It also saves a great deal of construction time (when compared to building a new structure),” the person said.

London’s famed Tate Modern, repurposed from the Bankside Power Station, is a famous example of an industrial space turned into a museum.

In Korea, the National Museum of Modern and Contemporary Art’s main branch in Seoul is a reincarnation of the Korean Armed Forces Capital Hospital and the Defense Security Command, built in 1913 during the Japanese colonial era.


A print factory in Seoul’s once-industrial district of Geumcheon has been transformed into a venue for artists and art lovers.

Originally built in 1975 and renovated in 2009, Seoul Arts Space Geumcheon is situated in a dreary industrial area, surrounded by small-scale factories and warehouses that are still in operation.

A project of the Seoul Metropolitan Government with an aim of providing a platform of support to local and international artists, the art center is now operated by the city-run Seoul Foundation for Arts and Culture.

Its artist-in-residency program has benefited over 400 artists from over 50 countries since 2009, providing them with studios available for 24 hours.

Artist studios are open to the public once a year as part of the Da Vinci Creative festival, which this year was held Aug. 23-Sept. 11 with a variety of events, art exhibitions and live performances.

During the annual media and performing arts festival, the dull factory alley leading to the factory-turned-art space came to life, bustling with visitors from children to those in their 70s.


South Jeolla Province’s Jeonju has its own factory-turned-art space emerging as a tourist attraction and Instagram hot spot.

The Factory of Contemporary Arts in Palbok was originally a cassette factory and spans across 13,224 square meters in the Palbok-dong Industrial Complex. Sharing the same fate as cassette tapes in the music industry, the factory ceased operation in 1990. For more than two decades, it stood abandoned.

In 2016, the Ministry of Culture, Sports and Tourism and Jeonju City set out to turn the haggard space into an art complex, reopening it to the public in February 2018.

The remodeled space retains much of its old look: the gray, rusty and faded walls and tainted gable roofs in the entrance.

It also houses in-house artists’ workshops and offices, where they occasionally hold special sessions to explain their artwork to visitors. 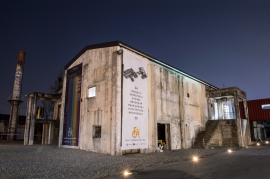 (Factory of Contemporary Arts in Palbok)

In 2016, chemical company Cosmo Chemical moved its production base from Incheon to another city, leaving a cluster of empty, run-down factories behind. Many were torn down. Some still stand empty. One -- a factory numbered 40 -- was given new life by architect Yang Soo-in.

Cosmo 40 is a multipurpose cultural complex in the former Cosmo Chemical compound spanning some 76,000 square meters. 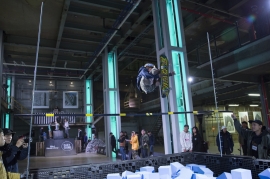 A kid skateboards inside the renovated factory building of Cosmo 40 in Incheon. (Cosmo 40) 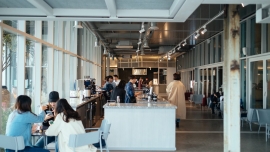 A new glass structure has been added to the building, surrounding halfway around the nearly 40-year-old factory and creating space for food and beverage businesses.

Yang kept the original structure intact as much as possible. The main factory building received structural supplements and is equipped with a new lighting system to be used for exhibitions, performances, lectures, parties and garage sales.


This factory-turned-cultural center opened in Busan in 2016, coinciding with the Busan Biennale in the same year.

Originally a property of wire manufacturer Kiswir, the factory came into existence in 1963 and produced steel wires until 2008. 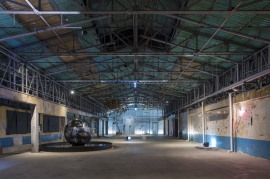 A multipurpose outdoor space at F1963 in Busan (Kiswire) 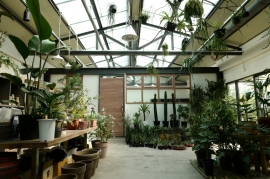 A garden space at Kiswire’s F1963 in Busan (Kiswire)

Repurposed as a multicultural space, F1963 is designed to host almost any kind of cultural events, including music performances and art exhibitions. It also has a bookstore, cafe, workshops and gardens.

Visitors can see exposed structural beams that support the concrete walls. Some of the construction waste, like concrete chunks, are used to decorate the garden in front of the building.

One of the cafes also features an exposed steel ceiling and concrete columns and uses discarded machines as decorations.

Although it is relatively difficult to reach by public transportation, F1963 seems to have no problem drawing visitors, viewed by many hipsters as the place to be.