[ The Korea Herald – Send E-mail ]
After early tournament exit, half Korean tennis player turns eyes to business
By Yonhap
Published : Sep 16, 2019 - 20:29
Updated : Sep 16, 2019 - 20:29
Jessica Pegula's campaign at the Korea Open tennis tournament lasted just one match, but the American player of Korean descent still has much on her plate during her stay in the country -- namely, finding inspiration for her business.

Pegula, world No. 60, dropped a grueling match against Ysaline Bonaventure of Belgium, 5-7, 6-2, 6-4, in the first round of the Korea Open on Monday at Olympic Park Tennis Center in Seoul.

After outlasting Bonaventure in the first set, Pegula found herself down 5-0 in the second set and managed to win just two games. She couldn't turn the momentum back in her favor once the pendulum had swung the other way and came away a loser after nearly two hours under the unseasonably scorching sun. 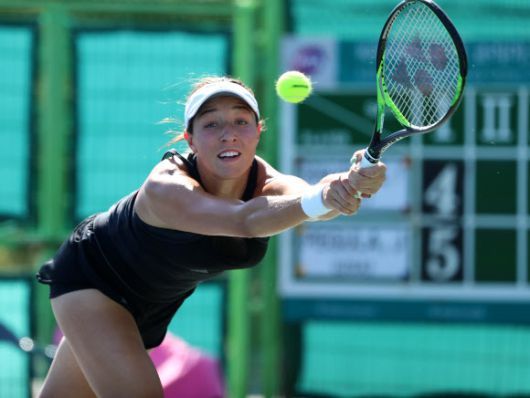 (Yonhap)
"It was a tough match. I had my chances. I am glad I was able to compete to the end and almost come back," she said. "But it wasn't enough today. It's disappointing because I wanted to win here in Seoul. I just have to move on and go to the next tournament."

Winning a match and contending in Seoul would have been special for Pegula because of her background.

She is the daughter of Kim Pegula, a co-owner of the National Football League (NFL) team Buffalo Bills with her husband, Terry, and president of both the Bills and the National Hockey League (NHL) club Buffalo Sabres.

Kim Pegula was born in Seoul but was adopted by an American family at age five. She will visit South Korea for the first time this week, though she won't get to see Jessica play at the Korea Open. Kim watched the Bills beat the New York Giants 28-14 Sunday afternoon in New York before embarking on a trip to Seoul.

Jessica's loss came before the rest of the Pegula family landed in South Korea.

"I wish I could have won," she said. "But there are always bigger and more things to look forward to, such as learning a little about my heritage here and my mom's heritage. I think it's really special."

Jessica Pegula added her mother plans to visit her orphanage for the first time since her adoption. Meanwhile, the daughter has her own plans mapped out.

The apple hasn't fallen too far from the tree, as Jessica has already dipped into the world of business. She and her sister Kelly are operating a restaurant, and Jessica has her own skin care line named Ready 24.

Noting that South Korea is well known for its beauty and skin care products, Pegula said, "I get a lot of inspiration from Korea."

As for her game on the court, Pegula said she is still a work in progress, despite earning her first career WTA title at the Citi Open last month.

"Definitely, it's been a really good season for me. Getting that first tournament win was very special," she said. "I haven't done that great since then. I think it's just a process of learning how to play at a high level. I am proud of what I've accomplished.

Next year, I'll definitely try to be top 50 and continue to do better at Grand Slams." (Yonhap)