The Korea Herald is publishing a series of articles to look into the weakening of the global economic framework in light of fading liberalism and the rise of trade protectionism and nationalism. This is the second installment. -- Ed.

The World Trade Organization was birthed in 1995 as an advocate of free trade, persuading global economies to lower trade barriers through yearslong rounds of negotiations.

Though it has slowly been losing its clout in recent years, the WTO continued to shine as a beacon of hope for liberalism, while maintaining the role of judge and jury for its 164 member nations seeking to settle lingering trade disputes.

But in recent years, a narrative has been fueled that the WTO has ceased to be relevant in the global trading ecosystem, mainly by the unexpected rise to power in 2017 of US President Donald Trump and his push for policies related to trade protectionism and nationalism.

Trump’s latest challenge to the global body has been to question its categorization of economies, specifically criticizing and putting pressure on the dispute settlement body to change its decision to maintain China’s “developing economy” status, amid the ongoing US-China trade war.

Trump, who called the WTO “broken” via Twitter in July, has repeatedly pointed fingers at key emerging markets such as China that continue to receive preferential treatment due to the status as a developing country under the international body’s rules. The status allows them to impose higher tariffs and keep up trade barriers that help them boost domestic growth, according to the US. 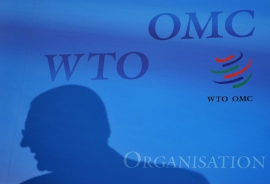 A silhouette of an official is seen with the logo of the WTO in the background at the organization headquarters in Geneva, on July 21, 2008. (AFP)

While Trump’s tweets may seem like mere verbal complaints, the US has been actually strategically playing at the WTO’s “weakest spots” and trying to neutralize the organization in the course of its trade war with China, according to experts.

“The US provoked a crisis in 2018 with three precisely targeted policy decisions that expertly poked holes in some of the WTO’s weakest spots,” Chad P. Bown, a senior fellow at the Peterson Institute for International Economics, said in a report released in June.

According to Bown, the US first imposed new tariffs, with a bold claim they would not be subject to international review, on nearly $50 billion of steel and aluminum imports, denying an “outside check.” This could lead to countries ignoring even the most basic rules that limit tariffs, he said.

The US also retaliated against China, a fellow WTO member, without going through the formal dispute resolution process, undermining the code that a nation must first win a dispute in order to request the opposite party change its policies. Washington’s decision to impose a 25 percent tariff on Chinese imports worth $50 billion in August 2018, coupled with an additional 10 percent tariff on $200 billion a month later, came after completing only an internal investigation.

Third, the US refused to allow the appointment of new Appellate Body members, a move, according to Bown, that initiated a procedure that could possibly end the WTO’s system to resolve disputes.

The Appellate Body is the WTO’s highest court of appeals and the current vacancies threaten to prevent the body from dealing with new appeals.

“(The US) imposed policies (national security tariffs and tariffs on China) that were even more problematic than ones ruled illegal in the past. It also threatened the existence of the WTO dispute settlement system that had decided that those earlier policies were illegal,” added Bown.

Another expert at the PIIE highlighted the need to notice the US strategy in blocking the appointment of new appellate members, which will prevent the WTO from moving against Washington.

“President Trump does not seem to care about adjudicating trade disputes or the broader damage being done to the WTO,” Jeffrey J. Schott at PIIE said in a recently released report.

“His trade policies violate WTO obligations at will, so he should be pleased with (US Trade Representative Robert Lighthizer’s) strategy to block WTO rulings against the United States.” 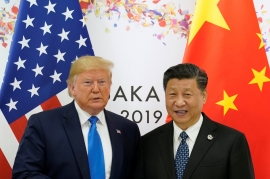 US President Donald Trump and China`s President Xi Jinping poses for a photo ahead of their bilateral meeting during the G20 leaders summit in Osaka, Japan, June 29, 2019. (Reuters)

The narrative questioning the organization’s relevancy has been a concern for global economies since the deadlock of the Doha Development Round in 2008.

The Doha round began in November 2001 as global trade ministers’ joint ambitious attempts to break down barriers in agriculture, services and manufactured goods.

Nearly two decades since its launch, it is viewed as a failed attempt to bring about a multilateral trade deal, highlighting the difference between developed and developing countries in the process. It has, in a way, created solid ground for nations to drift away from the spirit of multilateralism to bilateral trade deals.

“On trade, the G-20 punted on the current crisis over WTO dispute settlement, which has crippled the ability to adjudicate disputes and enforce WTO obligations. Advancing WTO negotiations on fisheries subsidies received only glancing comment,” Schott said in describing the Group of 20’s attitude toward the long-discussed consensus of needing to reboot the organization.

In line with Trump’s complaints about the WTO classifying China as a developing country, Korea is also stuck in a dilemma after the US president in July named the country among G-20 and Organization for Economic Cooperation and Development member nations categorized as such despite their strong economies.

Asia’s fourth-largest and export-reliant economy has been receiving benefits in the agricultural sector through its WTO “developing country” status acquired in 1995 by levying steep tariffs on agricultural products.

Though Korean government officials are reportedly divided on the issue, with those willing to drop the developing country status claiming the lack of the label will not affect existing free trade agreements with global partners, local experts have warned caution.

“By heeding to the US’ pressure, South Korea is likely to be labeled as a country that gives up on trade benefits easily -- it may lead to strong resistance from the agricultural sector and may push the nation to a losing end with no benefits,” said Heo Yoon, a professor at Sogang University’s Graduate School of International Studies.