About 3,200 martial arts masters and officials from 106 countries gathered in Chungju, a city in the central South Korean province of North Chungcheong, on Friday to kick off the 2019 Chungju World Martial Arts Masterships.

The competition, dubbed the Martial Arts Olympics, will continue through Sept. 6 at Chungju Gymnasium and seven other venues in Chungju, about 150 kilometers southeast of Seoul, under the slogan “Beyond the Times, Bridge the World.” 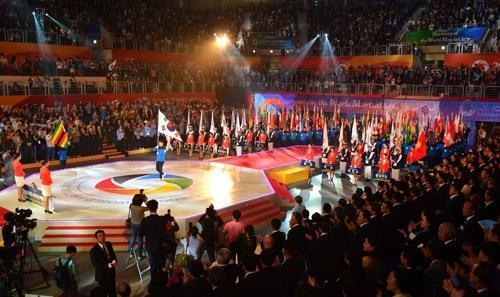 This photo released by the North Chungcheong provincial government shows the opening ceremony for the 2016 Cheongju World Martial Arts Masterships in Cheongju. (Yonhap)

Notably, the participating athletes include 369 top-notch martial artists, or 15.2 percent of the total, who are ranked higher than eighth in the world or have won medals in world and continental competitions in the last three years.

The opening ceremony took place at Chungju Stadium beginning at 7 p.m. amid an attendance of about 10,000 citizens, dignitaries, athletes and officials.

The opening ceremony began with a choir performance by the Little Angels of Korea and a taekwondo demonstration, and was divided into four parts -- Birth of Martial Arts, New rendezvous, Flare of peace and Eternal promise. Then, a number of K-pop singers, including Apink, N.Flying and Davichi, performed.

The Chungju masterships is the second competition to be held in North Chungcheong Province, after the first competition was hosted by Cheongju, the capital of the province, about 140 km south of Seoul, in August 2016. Sponsors of this year’s Chungju masterships include the GAISF, the Ministry of Culture, Sports and Tourism, the Ministry of Foreign Affairs and the Korean Sport & Olympic Committee.

The World Martial Arts Masterships Committee, headquartered in Cheongju, aims to develop the martial arts competition into a global festival on par with the Olympics and solidify North Chungcheong Province’s brand as a mecca of martial arts. (Yonhap)