SEJONG -- It has been two decades since South Korea took its first steps into the free trade market, seeking bilateral deals with major world economies in hopes of enjoying tariff benefits.

Since launching negotiations toward a free trade agreement with its first partner, Chile, in 1999, Korea has put 15 FTAs in place with three continental trade blocs (that involve 42 countries collectively) and 12 countries. 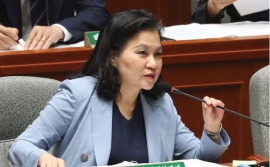 The negotiations with the US, which started in June 2006, drew significant attention here and faced a tough backlash from opponents. Korea had to make concessions in segments such as intellectual property rights, full-fledged opening of the capital market, US beef imports and investor-state disputes.

Nonetheless, ever since its implementation the US has continued to demand renegotiations.

Local experts are still split in their assessments of the efficacy of the Korea-US FTA. Pessimists say the agricultural sector has suffered enormously as a result of the pact, but optimists say local farm products could gain competitiveness in the long term amid brisk competition with imports.

In contrast, there were far fewer domestic protests against the agreements with the EU and China.

It took about three years for Korea to reach a deal with China, from the initial negotiations in May 2012 to signing in June 2015. The FTA with the world’s second-largest economy, which is also Korea’s largest trading partner, became effective in December 2015.

So far, 52 countries have become the nation’s FTA partners, while two countries -- Singapore and Vietnam -- can be considered “double partners,” having signed bilateral pacts, respectively, as well as the Korea-ASEAN FTA.

In addition, Korea marked the first Asian country to have reached a free trade deal with a Central American country.

In February 2018, the nation signed an FTA with five republics of Central American -- Honduras, El Salvador, Nicaragua, Costa Rica and Panama -- that needs to be ratified in the legislatures of all the signatory countries before it can take effect. Guatemala may join the deal later. 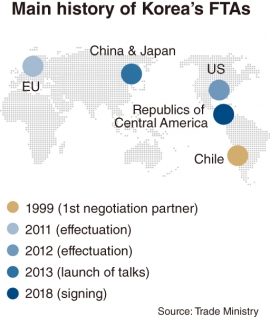 Earlier this week, Korea also reached a deal with Israel after negotiations that began in May 2016. The deal awaits signing and ratification.

Earlier this year, negotiators led by Minister for Trade Yoo Myung-hee launched talks with Russia toward a free trade deal for the services and investment sectors.

Meanwhile, the nation has held negotiations with other potential FTA counterparts but failed to reach consensus. These include Mexico and the Gulf Cooperation Council, which comprises Saudi Arabia, Oman, Kuwait, Bahrain, Qatar and United Arab Emirates.

As an alternative to a free trade pact with Mexico, Korea is seeking entry to the Pacific Alliance as a quasi-member, which would greatly open up trade.

The Pacific Alliance is a trade bloc launched in June 2012 composed of Mexico, Chile, Colombia and Peru. Its collective population of 210 million and $2 trillion gross domestic product make it the world’s ninth-largest continental bloc.

Concerning the talks with Northeast Asian neighbors, it has been more than six years since negotiations toward a Korea-China-Japan FTA began in March 2013.

The tripartite meetings are making slow progress amid contentious issues where the three countries can find little common ground.

A South Korea-China-Japan FTA would create the world’s third-largest trade bloc, surpassed only by the EU and NAFTA.

“A successful deal among the three would have the effect of establishing an alliance in foreign affairs and national security in addition to the economic benefits,” said an analyst in Seoul.