The late North Korean leader Kim Jong-il supported the continued presence of US troops on the Korean Peninsula even after the eventual unification of the two Koreas, a veteran lawmaker said Sunday.

Recalling the first-ever inter-Korean summit in 2000, Rep. Park Jie-won of the Alliance for Alternative Politics of Change and Hope said the late Kim, the father of current North Korean leader Jong-un, told then-South Korean President Kim Dae-jung that the US forces should remain on the peninsula to maintain the balance of power in Northeast Asia even after unification. 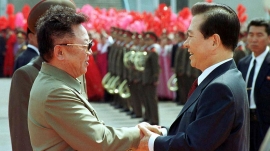 During the summit on June 15 of that year, Park quoted Kim Jong-il as saying that “China, Russia and Japan have historically and geographically annexed our territory but the US is located far away and has not annexed other countries in its history.”

When the South Korean president asked Kim why the North publicly demanded the withdrawal of US troops from the Korean peninsula, Kim said it was for “domestic politics.”

Two months after the summit, Park visited Pyongyang to find out the current North Korean leader’s view on the presence of the US troops. “He gave me the same response,” Park said via Facebook.