The man, identified only by his surname Kang, leaves behind a 6-year-old son, whom he had not seen since his divorce from Koh in 2017. Koh, who took custody, did not allow his visits until the very day he died.

On May 25, the two ex-spouses were scheduled to meet for a day out with their son.

Kang’s family said something seemed off that evening. Kang, who was usually responsive, was not answering calls or texts. Two days later, his brother filed a missing person report with the police. Koh said the ex-husband left the pension after attempting to sexually assault her. A week later, on June 1, Koh was arrested on charges of murder. 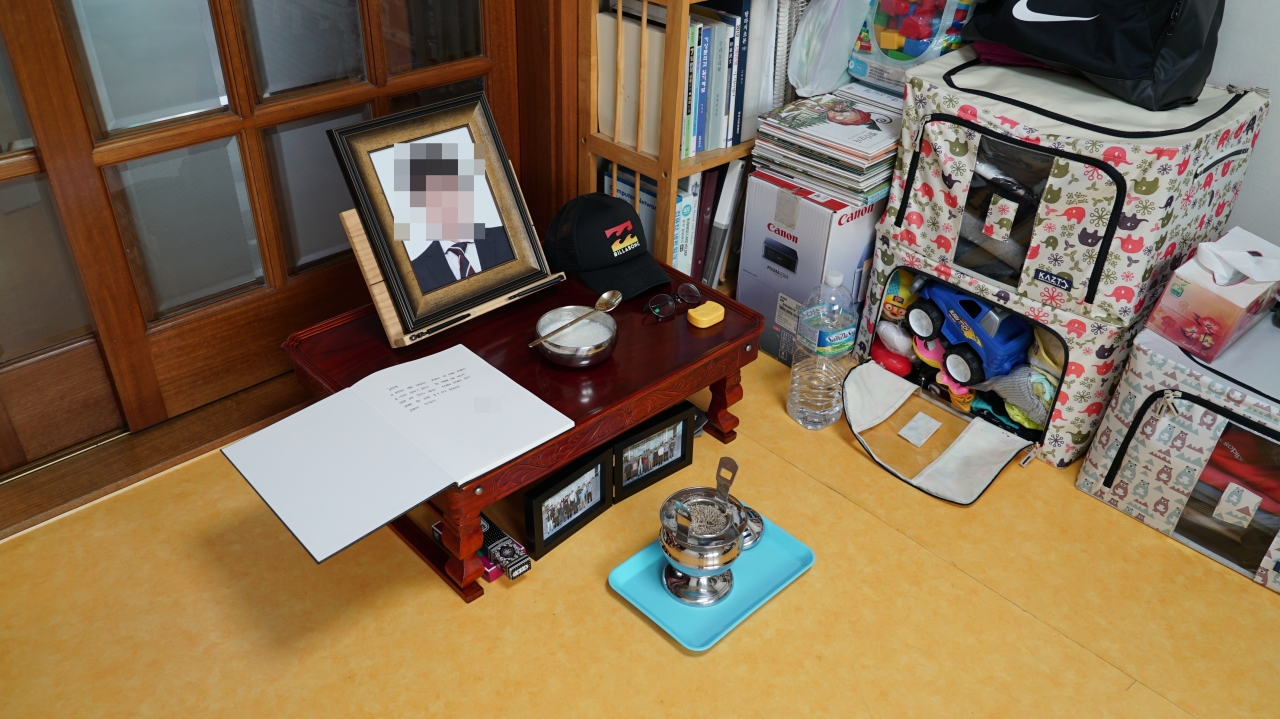 An altar for the alleged murder victim is set up at the home where he lived with his family. On the right are boxes where he kept his son’s old toys and clothes. (Kim Arin/The Korea Herald)
The Korea Herald met Kang’s brother at the family’s residence in a multifamily villa with shops on the first floor in downtown Jeju City on Monday. Their home was filled with the scent of incense burning for their lost son and brother. A family portrait hung from the living room wall.

The brother, younger by three years, sat across the table with documentation of phone records, text messages, photographs and memos. His face was solemn as he spoke.

The victim was, more than anything, a doting father, he said. “He missed his son and he was awfully happy he was finally going to see him. When they met, he said they were having the day of their lives. And that was the last we heard from him.”

When his brother stopped responding to texts and calls for about a day, he said he knew something was wrong. “I texted him at around 9 p.m. May 25, and he left a reply that seemed like it was sent in a hurry. When I called 10 minutes later, his phone was turned off.”

He said his brother had told him Koh was being strange before their meeting, which prompted him to call police early on about his brother’s absence.

“My brother told me her texts were eerie, they were out of character,” Kang said. “She usually texts very curtly but (in the days leading up to the incident) she used emoji and friendly language,” he said.

In older messenger exchanges that Kang showed The Korea Herald, Koh conversed with the victim in a strictly business-like manner, the kind of tone one would not use with someone closely known. “Later, the police found she was already searching things like tools for crimes on the internet at that point,” Kang explained.

“Another thing that’s strange is that my brother and Koh traveled in separate cars around town -- my brother in his and Koh in hers -- that day, but they used Koh’s car to get to the pension.”

According to Kang, the victim was unaware he was going to such lodgings.

“My brother didn’t know he was going to stay overnight until the very day. I know this because he told me where he was going to take his son. He had asked a cousin of ours who has a child of a similar age for recommendations,” he said. “He also phoned our uncle at around 3 or 4 in the afternoon. They were going to meet for drinks later that night. It’s clear he had no idea.”

“All the circumstances and evidence that have been uncovered up to this point prove that this had been preplanned,” Kang said. 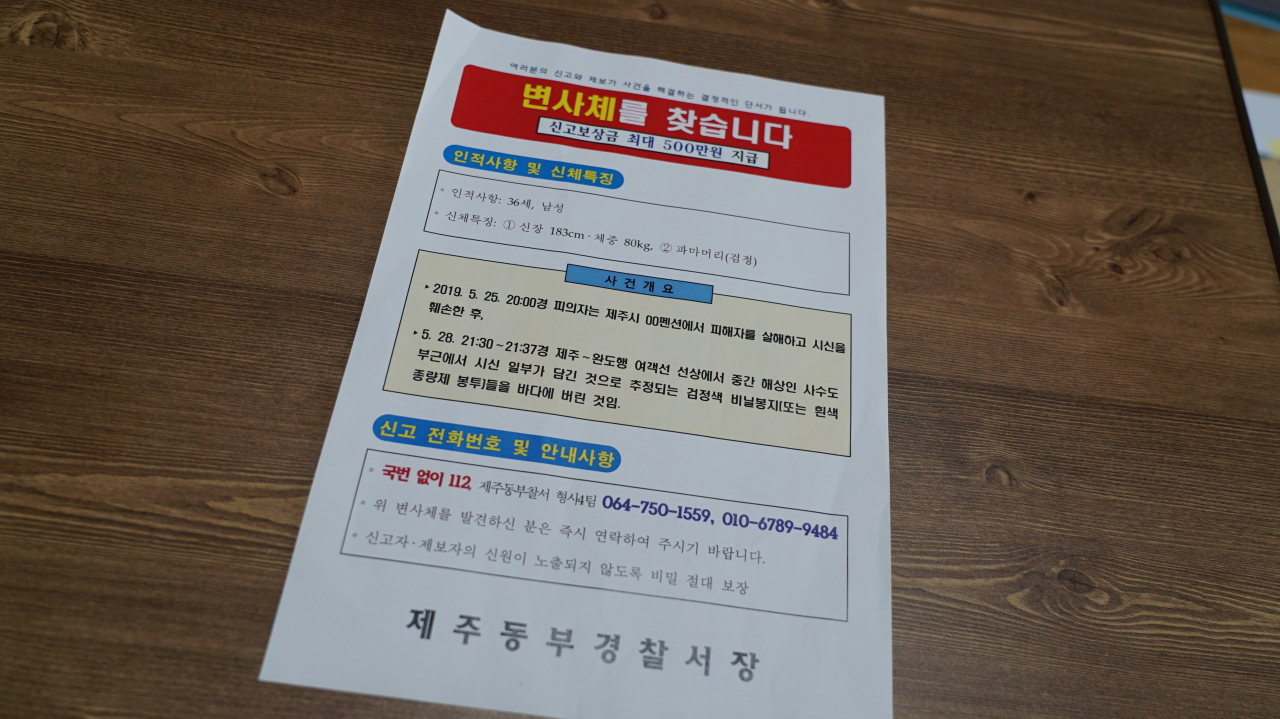 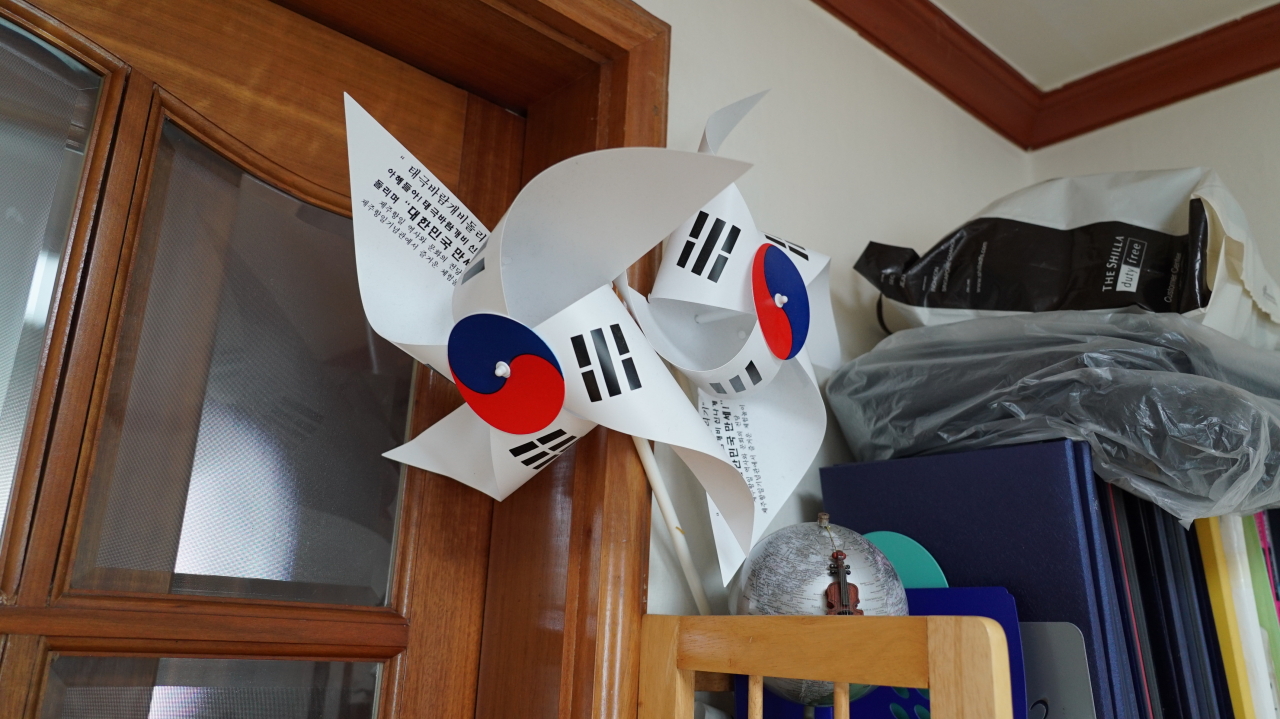 On the top shelf of a bookcase in a corner of the victim’s room are paper pinwheels with the Korean flag that the victim had made for his son. (Kim Arin/The Korea Herald)
Kang also expressed deep regret for not having been able to stop his brother’s body from being discarded. “Perhaps my brother’s death couldn’t have been avoided, but I think we could have at least prevented that (the discarding of the body) from happening,” he said.

“I called the police on May 27 and said that my brother went to see his former wife and hasn’t come back. They said they were unable to locate him,” Kang said, perhaps because the situation was not considered serious. “So I made up a reason. I told them my brother has said some things that might be interpreted as suicidal.”

The police were skeptical of the chances of his brother having fallen victim to a crime, he said. “I think their logic was, what could have gone wrong for a 180-centimeter-tall grown man?”

Kang added that he was wary of discussing what he felt to be shortcomings of the initial investigation. “The police are in charge of finding my brother’s body. I don’t want to get on their bad side.”

Taking matters into his hands, he looked for evidence to provide to police to clear Koh’s accusations against his brother.

“I heard on May 29 Koh’s account of what happened, that my brother attempted assault. I said my brother is not that kind of person and I went to find the CCTV, dashcam record.”

What Kang and his parents want most at this point is to find the victim’s body.

“I know we can’t retrieve his body. I begged the police, the press for any trace of my brother. A strand of hair, a piece of fingernail,” he said. “The fliers for the remains search are out now. There’s reward money. So, if anyone finds anything ...”

Kang said he has yet to receive a word of apology or any such expression or gesture from Koh or her family.

“If I had received one call (from Koh’s family), I don’t think I would have agreed to releasing her identity to the public,” he said. Koh’s family lives about a 20-minute walk from the Kangs, in an apartment in an affluent residential district.

“Another thing I want to protect is my brother’s patent right. I didn’t know he had one until recently. The little inheritance he will be leaving behind to his son might go to Koh, since she has custody. I can’t let that happen,” he said. “My brother worked for this. If my family can’t have it, I want his alma mater to have it.”

“My brother died May 25. On that day my family died with him,” he said. “I can’t even cry. I have a lot of work to do. I can commit the rest of my life to defending my brother’s honor. That is the only thing that I can do for him and I’m not going to give up.”