In Seoul’s bustling college district of Hongdae, there is a pub by the name of Bonghwangdang, or the Phoenix Hall. With the neon Liverpool Football Club emblem and the liver bird sign, it makes a conspicuous statement as an LFC supporters’ pub.

Bonghwangdang, which opened its doors in 2016, is where you will meet the city’s biggest Liverpool fans. On game nights, the underground pub is crowded with soccer fans looking to catch the game with drinks.

Its inside is rather like a tiny museum of all things Liverpool. Autographed shirts from former and present players, Liverpool merchandise and soccer paraphernalia fill the hall. Big screens hang on the walls, showing matches and other soccer-related footage. 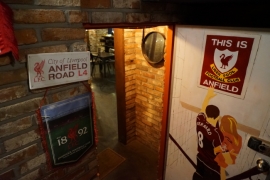 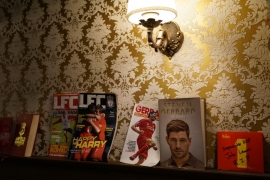 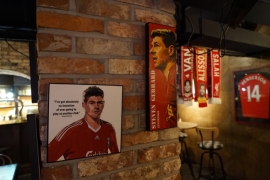 Kim Sung-min, the pub’s owner, says his pub was inspired by the soccer fan culture in the UK. “One time, I failed to get tickets at the Anfield Stadium and ended up watching at a nearby pub instead. It was refreshing to find the pub wasn’t just for drinking. You’re watching the game and you all support the same team. There is an immediate bonding. I wanted to make something like that for supporters back home.”

Needless to say, he is a big-time Liverpool fan -- a Kopite, if you will.

“People question why I’m so bonkers about Liverpool, I mean, technically it’s not my city,” Kim said. “But I find the notion that you can’t enjoy something that is not your own culture anachronistic.” Being a fan of a foreign soccer league is “the same as enjoying any other cultural content,” he said. “Just as you don’t need to be American to like Captain America.”

But his pub isn’t just about Liverpool.

“Aside from the Liverpool factor, I want this place to be a community for soccer fans, for new encounters and events, with soccer as the medium,” Kim said. “Back in the 2000s, there weren’t that many routes for following overseas leagues. That’s slowly changing and I’m happy to play a part.”

The soccer enthusiast said he “has always wanted to do something with soccer.”

Asked why he likes soccer so much, he said he liked the sport’s “element of suspense.” “In soccer, you never know what’s going to happen,” Kim said, referring to the 2005 Champions League Final as one such moment. “I was fortunate enough to watch the game at the stadium in Istanbul. Liverpool was losing 3-0 to AC Milan and I thought it was all over, and then Liverpool made that dramatic comeback. That’s the match that won me over as a fan.”

The English Premier League started enjoying popularity here when Park Ji-sung played for Manchester United, Kim said. “But I don’t see a lot of bandwagon jumping. Korea’s Kops tend to be quite loyal, as they are elsewhere in the world.” 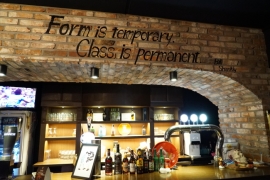 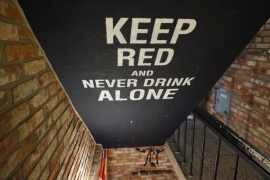 Of this season’s English league title hopes, Kim said as much as he’d like to see Liverpool win, he has learned to handle the possibility of a disappointment.

Liverpool’s failed title challenge in 2014 was traumatic for many fans, including Kim. “When we slipped from the title race five years ago, I think I learned to accept that match results aren’t something that I have control over. Which is hard because as a fan, you find yourself emotionally involved.

“I became a Liverpool fan in 2005, so I have yet to see a league title win,” he said. “We’re in a tight race (against Manchester City). I’m trusting this season will be different, but even if we don’t win this time, there will always be another chance.”

But Liverpool’s 2-0 win over Chelsea at Anfield on April 15 certainly helped soothe the painful memories. “It’s a very Liverpool drama,” Kim said. “I’m reminded of one particular Chelsea fan who came to the pub wearing a Demba Ba shirt, mocking (Steven) Gerrard. I wasn’t offended, I thought it was cute, actually. That memory kind of sticks out right now.”

Kim said Gerrard is a big part of what Liverpool means to him. “Steven Gerrard changed my life,” he said. “He is the reason I became a Liverpool fan, my hero and the best captain any team could ever ask for.”

“Liverpool has the biggest fandom in Korea next to Manchester United. I’ve been running the site since January 2011 -- on the day Torres transferred to Chelsea -- and I’m seeing an increasing influx of fans during this season and the last,” he said. “I hope we can broaden our fan base here with the League title win this season.” 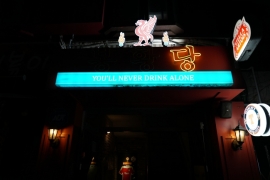 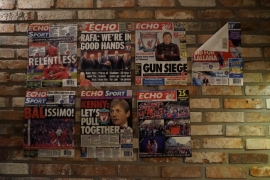