Violence sparked Thursday as Liberty Korea Party members formed human barricades in front of rooms on the second and fourth floors of the National Assembly, where the special committee on political reform and judiciary reform convene. 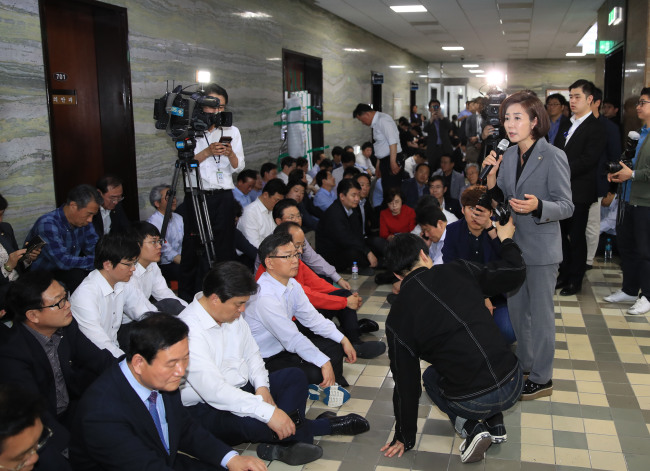 (Yonhap)
In doing so, the main opposition bloc sought to prevent the committees from opening a meeting to discuss and pass the bills.

The contentious bills are to establish an independent investigative agency with partial authority to indict high level government officials charged with wrongdoing, to implement a mixed-member proportional representation system and to revise the Criminal Procedure Act to adjust investigative authority between the police and prosecution.

Liberty Korea Party lawmakers also staged a sit-in protest in front of the team in charge of bill registration, and locked Rep. Chae Yi-bae of the minor conservative Bareunmirae Party in his office for six hours Thursday to stop him from attending a judiciary committee meeting.

The egregious series of clashes that continued into Friday were the first since the 2012 National Assembly Advancement Act was adopted.

In an urgent meeting that convened Friday morning, Democratic Party leader Lee Hae-chan said, “The Liberty Korea Party has triggered unimaginable violence at the National Assembly of the Republic of Korea. This has left an unforgettable stain on the history of the National Assembly. Those responsible for illegal acts must be dealt with by the law.”

On the other end of the spectrum, the main opposition held an urgent meeting in front of the National Assembly team in charge of registering bills, located on the seventh floor, Friday morning and promised to stop the ruling party from fast-tracking key bills.

Igniting controversy, Liberty Korea Party floor leader held a claw hammer during the protest, as the ruling party opened a surprise judiciary committee reform meeting early Friday morning.
Na claimed the tool belonged to either a ruling party member or a National Assembly official who attempted to break down the door to enter the bill registration office.

Meanwhile, ruling party lawmakers hammered on a door of the bill registration team that had been locked by the main opposition.

The ruling Democratic Party and three minor opposition parties have registered bills via email in the face of fierce resistance from the main opposition.