Korea delays satellite launch due to inspection of rocket

South Korea said Monday that its new satellite launch has been delayed as American rocket company SpaceX extended its inspection of its Falcon 9.

The launch date has been tentatively rescheduled to one of three days: Sunday, Monday or Dec. 1, the Ministry of Science and ICT said. 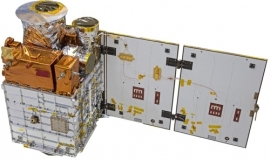 SpaceX, founded by Elon Musk, could finalize a new launch date after completing its inspection of its two-stage rocket in one or two days, according to the ministry.

The Falcon 9 had been scheduled to lift off at Vandenberg Air Force Base in California around 10:32 a.m. (US time) on Monday with the aim of putting the "Next Sat-1" into orbit.

The 107-kilogram satellite is designed to conduct space-based research.