It’s 20 minutes into the class and children’s illustrator Korky Paul is waving his shin in the air. 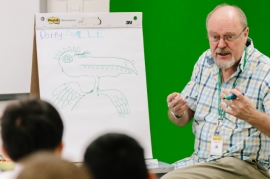