[ The Korea Herald – Send E-mail ]
Laotian team highlights culture at regional workshop
By Lee Hyun-joo
Published : May 9, 2017 - 18:37
Updated : May 9, 2017 - 18:38
The Laotian youth team was strongly represented through its cultural performance of Laotian traditional dance at the Asean Youth Workshop on Media Literacy in Bangkok last week.

The dance, complete with national costume, was part of a cultural exchange taking place as part of a larger workshop on media literacy and the correct use of social media in today’s modern age.

Through the passing of Laotian culture and traditions from generation to generation, Laotian people have always spread their culture to anyone who will listen and watch, setting the stage for the evening’s performance. 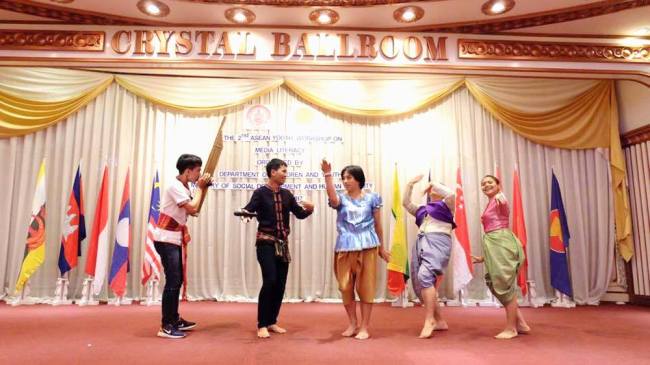 A Thai group performs a traditional dance with a musical instrument called the khaen. Vientiane Times
The group of Laotian youths, who work or are interested in media, represented the country at the workshop on media literacy, which representatives from seven ASEAN countries attended to perform their popular traditional dance.

The countries represented were Laos, Cambodia, Malaysia, Myanmar, the Philippines, Thailand and Vietnam.

The workshop was organized by the Department of Children and Youth under Thailand’s Ministry of Social Development and Human Security.

The purpose of the event was to raise awareness of the responsible use of social media through the proper use of the internet but participants from each ASEAN country also had the opportunity to share their culture through dance performances and singing.

Leading the Laotian team was the deputy head of the office of the Lao Youth Union, Somkiao Kingsada, who took four young representatives from the union, the National University of Laos, and the media.

Of course, one of the highlights of the event was the Laotian media team’s performance of the traditional dance known as Basalop along with two songs “Sao Xiengkhuang (Miss Xieng Khuang)” and “Hak Bao Heuan Kai (Love for a Man who Lives Far Away),” which received quite a bit of praise from event organizers and other regional representatives.

“I was very happy to attend the workshop as I could take part in showcasing our culture through a performance that caught the eyes of the international audience,” said Phonepaseuth, one of the Laotian representatives attending the event.

“Our team did a lot of preparation so that people were not disappointed with our performance. It wasn’t easy to choose songs and the costumes for the show but we chose the popular songs Sao Xiengkhuang and Hak Bao Heuan Kai. Our national costumes with our dark blue shirts were really appreciated by the audience which made us so very proud,” he added.

Phonepaseuth said their success came because the team had trained together a lot and they usually went over and over a part in practice, especially for the traditional Basalop.

“I was so excited and nervous when I was on stage because I don’t really dance that well and I’m never sure where I should be stepping. After we finished our performance many of the other workshop participants took pictures with us and asked us how to perform the dance,” he added.

“But it wasn’t only our team that performed well, I also liked the traditional dance from Vietnam because the music was so nice, and the dancing was very interesting too,” he added with typical Laotian modesty.

Another Laotian representative, Mr Phongpasith, said he had made a lot of friends and learned a lot about media and its impact on society. He also learnt a little bit of language from the other participants.

“I really liked the traditional dances from each country because there were such a variety of performances throughout the evening with each country’s beautiful culture on display,” he said.